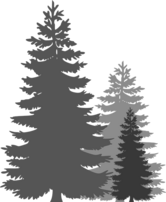 Article: They Know How to Prevent Megafires. Why Won't Anybody Listen?

When Cal Fire resources were stretched thin during the early days of the LNU Lightning Complex fires, virtually the only things standing between the flames and the villages of Pope Valley and Angwin were bone-dry timber, brush and phalanxes of bulldozers that stopped the fire in its tracks.

After lightning strikes ignited fires throughout eastern and northern Napa County, volunteers and paid dozer operators began to gather in Pope Valley, which was caught in a pincer movement by the Aetna Fire to the north and the Hennessey Fire and Spanish Fire to the east.

Many of them live in the area, and nearly all had friends, family or loved ones in the fire’s path. Many were retired or active firefighters. A few were retired bulldozer operators eager to lend their skills and knowledge of the terrain.

The biggest concern was the Aetna Fire. If it got past them, it would have had a straight shot up Schwartz Canyon into Angwin and then down into St. Helena’s Bell Canyon watershed. Or, if the wind changed, it could charge west toward Calistoga.

“It would have been impossible to stop,” said Davie Piña, co-owner of Piña Vineyard Management.

The Piña team was just one of several that took the initiative that week. Jeff Parady of Pope Valley led a team that fought to keep the fire north of Aetna Springs – and away from Parady’s own home – when it first attacked on Wednesday. The Eakles and Hardins used dozers and water trucks to cut off the Hennessey Fire and the Spanish Fire from the other direction. The Pridmores, Wheelers and Boystons fired up more heavy equipment to protect Capell Valley. (The Napa County fires eventually merged to become the Hennessey Fire, which burned 30% of Napa County and destroyed over 300 homes.)

“Without the combined forces of a bunch of good old boys and a bunch of equipment, the outcome probably would have been a lot different,” said Davie Piña’s business partner, Johnny White.

Fires are nothing new to White, whose Pope Valley home has been threatened by four fires in the last 11 years. He called in the company’s bulldozers and water trucks to doze rings around his house and those of his neighbors.

“We lost a few houses, but we saved the majority of them,” said Johnnie White.

California’s wildfires are hardly “natural” — humans made them worse at every step
We fuel them. We build next to them. We ignite them.